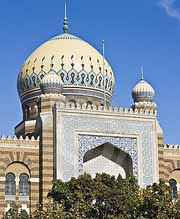 A dome whose shape resembles an onion; its diameter is larger than the cylindrical shape upon which it is built. Also called a Moorish dome. Onion domes appeared in Russian and Muslim countries beginning in the 16th century. One of the most famous churches in the world with onion domes is St. Basil’s Cathedral in Red Square in Moscow. Although rare, there are homes in Wisconsin that have onion domes. The dome pictured here is on the Tripoli Shrine Center located at 30th and Wisconsin Avenue in Milwaukee. The building is also Milwaukee’s most outstanding example of Moorish style architecture.