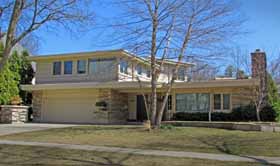 Build from the early 1950s through the early 1960s, this brief architectural style is characterized by flat or very shallow pitch roofs, strong horizontal lines and large plate glass windows often with wide sashes. Many sported an attached garage also – one car no less! Typically considered a bit more upscale than many homes built in the day, you’ll find some of the best examples along the Menomonee River Parkway in Wauwatosa, WI.