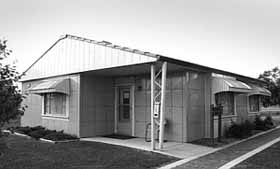 A curiosity of the post war era, Lustron homes are the grandfather of pre-fabricated homes. The exterior is made of enameled steel panels. They were built between 1948 and 1950. Although only about 3,000 were made, it’s not hard to find them in Milwaukee neighborhoods built during those years. The concept was to design a home that could be constructed quickly for substantially less than stick build homes of the time. The promise to returning veterans was a low cost, durable, low maintenance, space saving, modern home. Most Lustron homes have two bedrooms and no basements. The interiors were also constructed of metal panel walls and ceilings. Kitchen cabinets were metal and all interior rooms and closets featured pocket doors. This same construction technology was used to build many corner gas stations during the period and some people still refer to them as “gas station houses”. Many have never been painted since the day they were built. A buyer could choose from one of four colors; blue seemed the most popular, at least in Milwaukee.