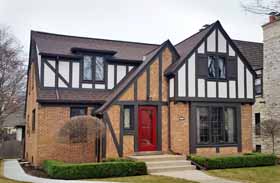 Elizabethan architecture was all the rage back in the 1500s, when Queen Elizabeth the 1st was on the throwne. Many people are unaware that some architectural styles were named after English or British royalty; “Victorian” was popular during Queen Victoria’s reign (1837 to 1901); “Georgian” during the 1700s when King George I through IV were in charge. Elizabethan architecture in its day was characterized by larger windows, half-timber & nogging facade, large bargeboards, second floors that overhang and multiple sculpted chimneys. Originally they were more ornate than Tudor houses, their predecessor. Elizabethans in the United States were one of many revival styles being built in the second half of the nineteenth century through the early part of the twentieth century. If you don’t see a Tudor arch and the second floor overhangs the first, it’s an Elizabethan. Also: Tudor Style Architecture