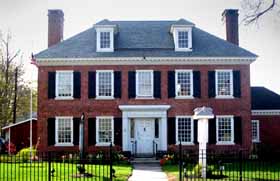 No, this was not a style made popular in Georgia! It became popular in England during the reign of Kings George I through IV. It looks a lot like a Federal style home. Actually it is the other way around; the Georgian style came first. The Georgian style was built in the USA from about 1700 through 1780. In Wisconsin homes of this style were built from about 1845 up until today. They often have dentils at the soffits and a portico. After that the Federal style evolved with somewhat simpler designs and generally more flat facades. The ‘pure’ version of both styles were symmetrical, had five windows on the second floor and a center front entrance door with two sidelights. This style typically had a chimney at each end also. Gable roofs were the most common with three dormers, but some have hip roofs and two to four dormers.